Often, a lot of people wonder, like everything else, how Durga Puja has evolved over the past decades or even centuries. We hear about the legacy from our parents and even grandparents and at times receive quite a few interesting insights and know about events that took place in those ages.
To begin with, the basic concept of theme Puja emerged about 40-50 years back. ‘Kumartuli’ idols of Maa Durga, were considered to be class apart and superior in artistry as well. For our parents going out for Puja Parikarma during those four special and auspicious days from Mahasashti to Navami, was the most exciting part.
According to an account narrated by a friend’s mother, she had experienced some of the best days of her life, enjoying Durga Puja, especially the part where they would visit different Pandals and view different kinds of idols of Maa Durga. In those days there wasn’t much variety in the idol decoration and creation. But idols which came in from the hub of Maa Durga idol makers, namely Kumartuli, received special attention. This is because most of the highly talented sculptors and artisans belonged to that area and actively participated in creating some of the most beautiful and memorable Goddess Durga Idols of all time.
During the 1970s, a period to which most parents belong, Durga Puja was more about illuminations and lightings. Various incidents and events from the mythologies were taken up and relayed through the beautiful and artistic designs portrayed via moving lights. Purely with the help of electricity and colourful tiny bulbs crafted on wooden structures, forming various images and silhouettes of different Gods and Goddesses, actions like the killing of Mahisashura by Maa Durga, Maa Durga gathering power and becoming an epitome of Shakti (power)and much more were enacted. These special lightings took away most of the attention and gradually initiated the transformation from traditional to theme Puja across West Bengal.
Idol Sculptors in those days concentrated much more on the beauty exuded through the idol of Maa Durga rather than creating a unique sculptor based on “Life on Mars” or a designer pandal made out of clay pots or cups. Every idol was more beautiful than the other and the sculptors perfectly captured the power and beauty lying within the bosom and face of Maa Durga. The images captured the vibrant as well as the feminine and motherly side of Goddess Durga, simply with the help of soft mud and a beautiful saree with the necessary ornaments. In those days welcoming and pleasing as well as performing the religious ceremonies diligently for Maa and her children mattered much more than pleasing the taste, greed for variety and appeasement of the onlookers.
Then it was all about the fun and frolic associated with the Barowari Pujo within the locality, enjoying with friends and family rather than comparing one Theme Puja and Idol of Maa Durga to another. Simplicity was the only special feature of Durga Puja in those days with a touch of illumination that paved the way for a new concept and style for future celebrations. 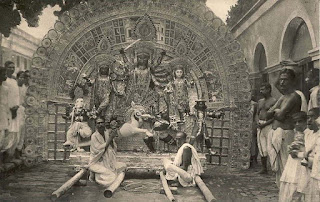