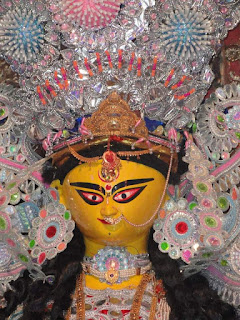 Gobindoshon Dutta Chowdhury  left Andul Rajbari as well as the title"Chowdhury" and came to Gobindopur at 1580 CE. He gain trust of Raja Todar Mal(Secretary of Akbar) that he was appointed as the Governor of the province in 1594.He has Four sons- Baneswar Dutta, Bhuabaneswar Dutta, Ram Narayan Dutta, Bisweswar Dutta.
Ramcharan Dutta, son of Baneswar Dutta, born in 1630 CE at Gabindapur village.He gave up his property of Gabindapur village to British E.I.Coy for construction of the first Fort William (BI. 1696 CE) under the supervision of John Goldsborough, in exchange of a vast amount of land at Chitpore. In 1705 CE, he moved out from Chitpore and settled at Hatkhola (presently whose address is- 2 Madan Mohan Dutta Lane, Kolkata-06).Ramchandra actually didn’t sell his Chitore property to any one, he just left as it is and moved to Hatkhola.
Durga and Kali puja there have started since 1716 CE by him. Ramchandra Dutta became the pioneer of HATKHOLA DUTTA FAMILY.He established a Shiva Lingam shrine at chitpore road (earlier pilgrim rd- because this road would go straight and connect with Kalighat temple which is a pilgrim place) close to his house.It is the old Hatkhola Dutta '. In 1716 CE Ramchandra initiated annual worshiping of Goddess Durga and Kali.
It is said in the old Patna city ‘Chhoti Patan Devi’ shrine situated at Chandi Chowk area in old Patna city was erected by  him .
Ramchandra was married to Durgamoni.
They had five sons- Krishna Chandra, Manikya Chandra, Bharat Chandra, Shyam Chandra and Gorachand. Krishna Chandra’s elder son was Madan Mohan Dutta. He became a merchant and amassed enough wealth.
Madan Mohan had 4 sons and few daughters.
He was very religious  too. Due to his fame, his house began to known as the ‘Hathkhola Dutta Bari’ and his descendants as the Duttas of Hathkhola.
Now it is carried on by Sraboni Ghosh,wife of late Supratik Ghosh.
In the month of Aashar during 'Shukla Nabami', the frame work of the idol is worshipped, which is later used for the making of the idol.After 7 days of Ulta Rath, the main structure is worshipped and the soil is applied twice followed by  application of white colour ,main colour as well as Chokkhu dan on Mahalaya.The  'Chalchitra' is divided into three parts.The upper right side of the 'Chalchitra'  comprises the   painted image of Radha Krishna and the  Bottom  comprises of the image of Chandi of 'Nishumbha' war.On the upper left side of the 'Chalchitra' is the picture of Ram and Sita while at its bottom is Chandi in her 'Shumbho' form.At the top middle of the 'Chalchitra', is the image of Kali and at the bottom is the painted image of 10 avtars of Vishnu.On the curved frame work of the 'Chalchitra', there are 2 parrots and pineapples respectively. Lord Ganesha is  seen to be sitting on the  lotus and Goddess  Lakshmi &  Saraswati  to be standing on lotus. Behind the idol of Lakshmi on the is the image of Shiva on an ox.
Behind the idol of Saraswati is Ram and Hanuman. Goddess Durga's appurtenance, the Lion has a horse face white in colour.On the day of Panchami , when carrying idol to the singhasan , Lord Ganesha will enter first as well as leaving first.We decorate the idol with jewellery, weapons, bracelets, crown,etc
Shasti Pujo & Bel boron takes place in Bodhon ghar. In front of Goddess Durga, Adhibas & Chokkhudan takes place. "Sri" is prepared on Shashti and on Shaptami morning, we proceeds towards the Ganga ghat for "Kolabou Snan" where
silver fan & umbrella respectively is  needed and a part of our ritual and tradition as well as a mark of Bonedi barir pujo. We return to our house and Puja starts. "Hom" starts in Bodhon Ghar and this  continues till Navami. Our mandap is Shaptasati Mandap, a dedicated sacred place where  Katyayani form of Goddess Durga is worshipped. It helps devotees to gain strength
and courage in difficult times.108 pieces of  Lotuse are offered to Durga maa during Shondhi pujo and 108 Diyas being lightened up in the form of an " OM" 🕉(a word for affirmation or assent intoned as part of a mantra or as a symbolic mystical utterance during meditation). Kheer er Putul (the doll of condensed milk) sacrifices (Shotru Boli- enemy sacrifice)
are still prevalent in the Hatkhola Dutta Bari Old.
Kumari Pujo, an essential part of Durga Puja,  involves worship of an unmarried teenage girl  symbolizing Indian   Goddess  takes place consecutively 4 days namely Saptami , Ashthami, Sondhi pujo and Navami. After the end of "Dakkhinantar", Chandipath stops. Threads attached  to the "Ghot" (earthen water jar or pot) is being cut. Maa Durga's  name is being written 3 times in 3 belpata(vine leaves) each with Alta and being offered to her. Maa Durga's feet is being seen with help of Dorpon,a small mirror. 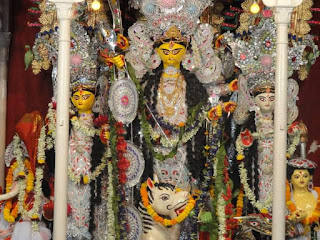 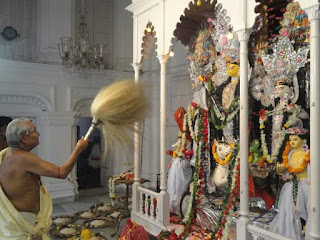 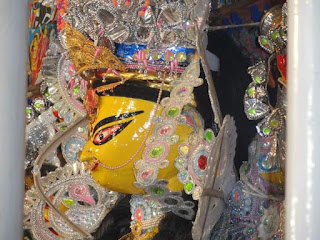 Accurate time is followed  while doing Boron and shidur khela as well as Bishorjon.We also have the 'Nilkontho' ritual which is considered a good omen when the  second bird flies homeward. One of the birds are set free on the time of immersion while the other one is let out after the immersion. Idol  of Goddess Durga is lifted and  carried on shoulders in such a way that the idol does not touch the ground. Then Idol is carried on two boats which are sailed towards the middle of the river where  the two separates and Goddess Durga is immersed into the water. During the immersion of Goddess Durga, everyone chants " bolo dugga mai ki jai", "asche bochor abar hobe, bochor bochor abar hobe " in the background while  the idol goddess Durga is seen slowly sinking into the river. 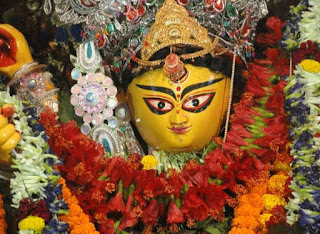 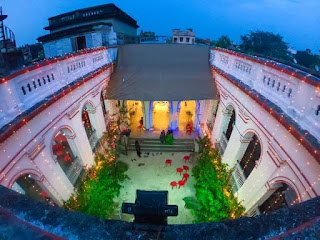 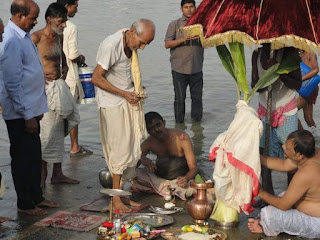 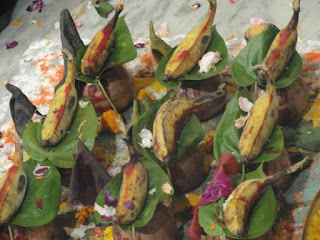 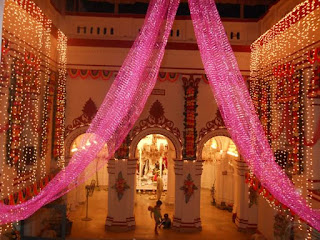 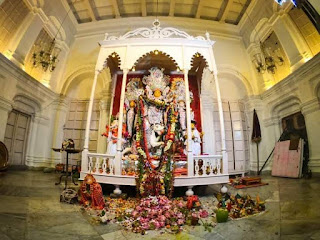 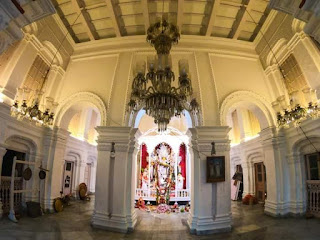 Posted by Sharadiya at 07:38 No comments: